By Kevin O'Connor as seen in vtdigger.org: https://vtdigger.org/2017/08/20/green-business-summit-aims-spur-national... 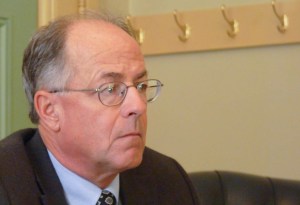 Paul Costello doesn’t want to talk about the polarizing problem of climate change.

He wants to talk about solutions.

“We have smart, creative people advancing innovations around agriculture, clean energy, green building, transportation and wise use of resources, recycling and digital technologies,” says the executive director of the Vermont Council on Rural Development. “If we look at this as an economic opportunity, the state can position itself as a leader.”

That’s why Costello and his nonpartisan, nonprofit organization are aiming to attract hundreds of movers and shakers to a three-day “Catalysts of the Climate Economy” summit Sept. 6-8 at the University of Vermont in Burlington.

The public program is set to gather industry, policy and investment leaders to explore ways to simultaneously boost employment in the state and address global warming.

Paul Hawken, author of the New York Times best-selling book “Drawdown: The Most Comprehensive Plan Ever Proposed to Reverse Global Warming,” is scheduled to be the keynote speaker.

The summit also will feature an “innovation and pitch contest” for entrepreneurs to present ideas and a series of “innovation tours” showcasing Vermont businesses, farms and power producers. More information is available at the event’s website: www.ccecon17.com.

For two decades, the Council on Rural Development has led policy efforts in agriculture, energy generation, the creative and digital economies, community organizing and, most recently, the Working Lands Enterprise Initiative that grants about $1 million annually to farm and forestry projects.

Such investment seeds individual businesses. But with the entire state facing economic and environmental challenges, the organization is working to expand its efforts with its current climate change initiative.

“Many worry that addressing climate change can undermine jobs and diminish economic opportunity,” organizers say in one internal document. “Confronting climate change through innovative economic development, however, can be a competitive strategy, one that will build national reputation, create jobs, and attract youth and entrepreneurism to the states that lead.”

Costello will attend the summit not only as the council’s executive director but also as co-chair of Gov. Phil Scott’s Vermont Climate Action Commission, which is aiming to unify the state’s climate and economic goals.

“Vermont is already an incubator for this kind of business,” Costello says. “By hosting such an event, it’s a major opportunity to reach out to entrepreneurs and investors nationally.”