As seen and heard on Vermont Public Radio: http://digital.vpr.net/post/new-climate-action-commission-seeks-jobs-gro... 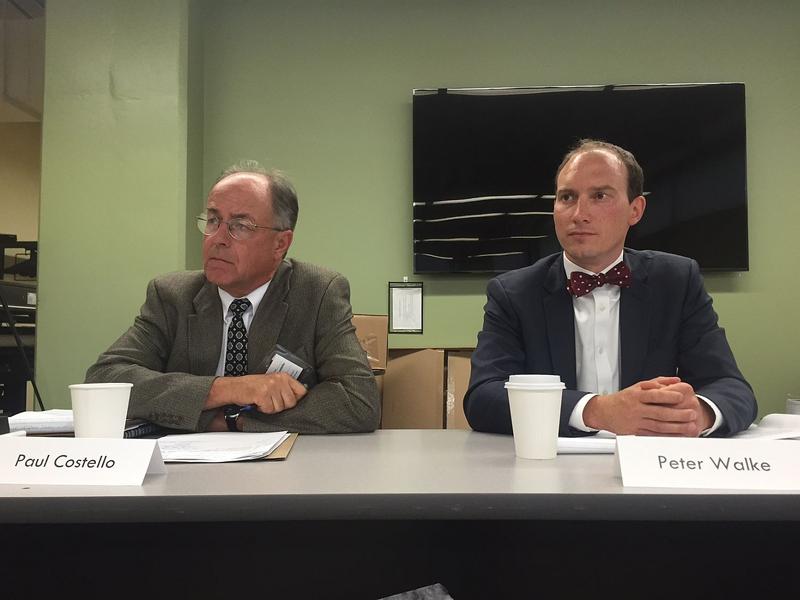 The subterranean conference room where the commission met didn’t offer much in the way of ambiance, and the fluorescent lighting and standard-issue office furnishings certainly didn’t portend any revolutionary thinking.

But the 21-member Vermont Climate Action Commission is thinking big.

“I think we’re at a transformative moment in world history, a critical moment,” says Paul Costello, a commission co-chairman who’s also the executive director of the Vermont Council on Rural Development.

Costello says that “critical moment” is Vermont’s to seize.

“We are in an international competition with other places that are looking at economic development that will answer climate change, because solving climate change is the most fundamental problem of our time,” Costello says.

Scott, a Republican, created the Climate Action Commission through an executive order last month. It’s a noteworthy development from a politician who, as recently as last year, was dodgy on the role of human activity in the warming of the planet.

But as the Trump administration rolls back emissions standards, and withdraws the U.S. from a landmark international climate treaty, Scott is suddenly devoting political attention to the climate cause. And he, and the commission, are conducting their work through the lens of economic development.

“While it’s a crisis, it’s also a wealth opportunity,” says Bill Laberge, owner of Grassroots Solar in Dorset, one of several businesspeople on the commission. “I think that we can create a cleaner environment, and we can also have a robust economy.”

Joe Fusco, a commission member who works at Casella Waste Systems, says he hopes the commission will focus on ways lure “businesses, corporations, entrepreneurs, startups, that are solving this [climate] problem” to Vermont.

“What I believe is, is that this is a once in a generation opportunity where economic opportunity and environmental need meet,” Fusco says.

In fact, the executive order that created the panel says any recommendations for reducing greenhouse gas emissions must also “spur economic activity, inspire and grow Vermont businesses, and put Vermonters on a path to affordability.”

After a period of steady decline, however, greenhouse gas emissions are back on the rise in Vermont. And reforming the economic sector in ways that advance the state’s climate goals is a politically fraught exercise, as past efforts at reducing emissions have demonstrated.

Johanna Miller, the energy program director at the Vermont Natural Resources Council, says if the commission is serious about reducing emissions, then it needs to be bold in its policy recommendations.

“Things like carbon pricing absolutely need to be on the table, figuring out how those policies and others like them work well for the state of Vermont,” says Miller, who is also on the commission.

And a policy like carbon pricing, which involves a tax on fossil fuels to discourage their consumption, exemplifies the tension between climate advocates and established economic interests. Scott has already said, in no uncertain terms, that he would reject any form of a carbon-pollution tax.

And some of the concepts that arose from the commission’s first meeting - electrifying cars, for instance, or improving efficiency standards - might require policy interventions that create economic winners and losers.

Harrison Bushnell, a senior at U-32 High School, is the commission’s youngest member, and is there to represent the interests of Vermont students. As Bushnell introduced himself Tuesday, he recalled his experience as a page in the Vermont Statehouse and U.S. Senate.

“And I’ve sort of seen collaboration that works and also a lot of what doesn’t work, and I hope this can be a commission that comes together and hears everyone’s voices, and so I’m excited to get to work,” Bushnell says.

Climate change advocates, many of them still skeptical of Scott’s commitment to enact emissions-reduction policies, will be watching that work closely. And some are already concerned about the process under which the commission is operating.

The executive order that created the panel says “the commission shall have” the duty of convening a “technical advisory group.” The group is supposed to offer guidance and expertise on the complex technical issues the group will undoubtedly encounter.

“I’m a process-oriented person. The governor’s executive order makes crystal clear that it was the commission that’s charged with convening the technical advisory group,” Miller says. “It seems that the appointments got out in front of the commission that was tasked with that role.”

Climate and environmental advocates have also raised concerns about the appropriateness of one of the co-chairs of the advisory group: Annette Smith, the executive director of Vermonters for a Clean Environment.

Smith has become a controversial figure in the renewable energy community as she aids residents seeking to block proposed energy projects from being constructed in their towns.

Smith also opposes all ridgeline wind energy in Vermont, a resource that many climate advocates say is critical to the state achieving its emission-reduction goals.

Walke defends the decision to select Smith as co-chair the advisory group. He says the commission is working on a compressed time frame, and that it was important to have the advisory group in place before the first meeting.

And Walke says Smith and Kevin Jones, a Vermont Law School professor and other co-chair of the advisory group, will help the commission gain access to the experts needed to conduct its work.

“Both Kevin and Annette have a wide variety of networks of people that they can reach out to, to help us identify those people, and then we as a commission can decide if those people are appropriate, and then we can move forward,” Walke says.