Monique Priestley, founder of the Space on Main in Bradford, is a VCRD board member. Read on to see what 1 person in a community with a good idea and energy can do!! 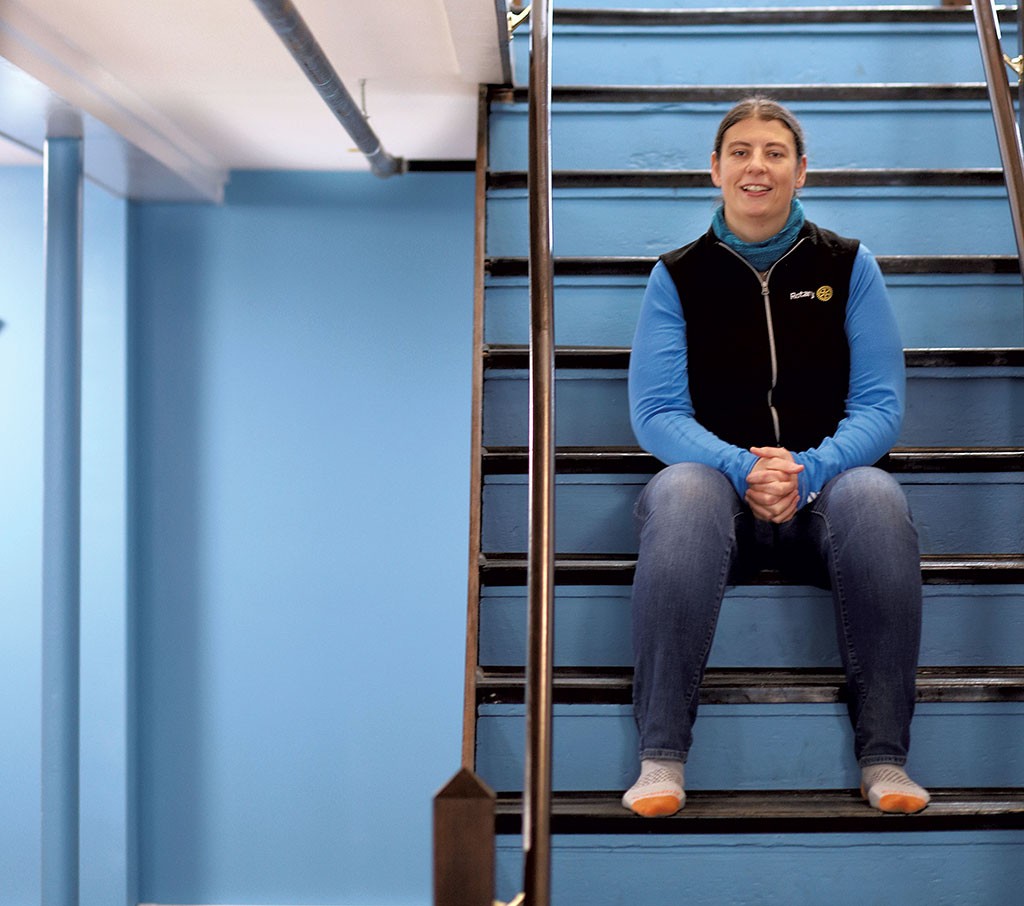 Things were not looking good for the Upper Valley town of Bradford — population 2,797 — in the autumn of 2015. In August of that year, Hill's 5 & 10 shuttered after years of declining sales. Since 1959, the family-run shop had proffered everything from rain boots, work gloves and Johnson Woolen Mills jackets to school supplies, fabric by the yard and cookie sheets.

Across the street, Perry's Oil had supplied the community with home heating fuel, a gas station, an appliance store and a liquor outlet for most of a century. A month after Hill's closed, the Perrys sold their businesses to regional fuel supplier Osterman Propane, which promptly shed all but the propane and heating oil sales.

And, just like that, the village's center of gravity seemed to tip. A space populated by friendly, if struggling, mom-and-pop businesses became a land of empty storefronts.

"The whole town was crying," recalled the Space on Main founder Monique Priestley, seated at a co-working table in the former Hill's storefront last week. "Or they were coming to [community] meetings and leaving crying. Everyone was super depressed."

Priestley, 32, grew up across the Connecticut River in neighboring Piermont, N.H. She moved to Bradford as a teen, graduated from Oxbow High School in 2004 and then commuted to Lyndon State College, where she earned a bachelor's degree. Grad school took her to Seattle for a master's of communication in digital media from Washington State University.

A few years later, Priestley returned to Vermont while keeping her Seattle-based job. "I went back and forth between here and there for months at a time. I was basically trying to figure out where to go," she recalled. But community involvement made her feel "hopeful," and amid the gloom of late 2015, she found new purpose.

That's when Priestley started putting together the pieces of the nonprofit co-working space she would open in October 2018. Now, in exchange for monthly dues, the Space on Main's members have access to super-fast internet, 7,000 square feet of common area and private workspaces, a light-filled event space, a conference room, and discounted rates for workshops and classes.

In its second month, the Space on Main has recruited 16 full-time members, and more than 1,000 people have used the storefront for classes, meet-ups and workshops. Maker-space equipment is in the works.

In addition to managing day-to-day operations at the Space on Main, Priestley works full time as the digital director for Seattle-based web developer CampusCE. And those are just two of the things she does.

That's still not all. Priestley is a trustee of the local public library and belongs to the Vermont Council on Rural Development, Global Campuses Foundation, Little Rivers Healthcare, Bradford Business Association, Bradford Planning Commission and Bradford Young Makers Club. She's a mentor for the Mentoring Project of the Upper Valley and is involved with Leadership Upper Valley and the Vermont Changemakers Table.

Last week, Priestly somehow found a few minutes to talk with Seven Days about launching the Space on Main, how to make rural Vermont appealing to young people and what makes small towns tick.

SEVEN DAYS: How did you become so involved in civic life?

SD: How is community service different now than it was when you were growing up?

MP: I feel like I don't often see families volunteering as much. When people ask how to get their kids involved, I want to be just like, "You can do this together." I can't imagine a local organization that wouldn't want kids to be a part of these activities. There should be kids running around.

SD: Where do you find the energy for all the things you do?

MP: I love being in a room with a bunch of people who give a shit. They're there because they want to help, and they want to do something. So the energy leaving a meeting is always so excited and hopeful. And they're intelligent — even just listening to people debate is a worthwhile thing.

SD: What made you decide to pull the trigger on the Space on Main?

MP: I had this retirement goal of starting some kind of center that would have educational offerings on a sliding-fee scale. It was a pipe dream, but I had told [Cohase Chamber of Commerce treasurer] Marvin Harrison about it, and we were at a Bradford Business Association meeting [in late 2015], and Marvin was like, "You should go tell your idea to Angela Wendell [who owns the Hill's building]." People started gathering around the table...

When I got home, I googled "how to start a nonprofit," and one thing led to another. So I formed a board and did the IRS application. I did a survey and got 85 responses in two days. I went on lots of coffee dates and to people's houses; I think I had met informally with 300 people by the time we opened. People sat down on the couch with me and cried; they wanted to be engaged with other people, and they didn't know how. All they really wanted to do is teach somebody a skill or show someone the art they created.

MP: I joined the [town] planning commission a few months ago. The town is planning what it's going to look like in the next 20 years, and I'm super excited about it. A lot of it is about making a better use of mixed-use buildings. There are areas that are planned [for new development]. Because of what's happened here with [the Space on Main], a lot of people have come forward to say they want to buy a building and turn it into this or that — a pub, or a B and B, or a sewing-quilting-knitting place.

I don't know if those kinds of projects are moving forward faster now than they were before, but I feel like I'm hearing about them all the time. There's so much potential here. I feel like it could spiral.

SD: How do you make Vermont's small towns appealing to a new generation?

MP: I genuinely think that co-working spaces — or any kind of community center, which will look different for every town — can make a huge difference. People are trying to figure out how they fit in, but many don't connect through schools or church or town government. So creating those spaces for people to go and network is going to be critical.

Growing up in this area, people are always like, "Bradford sucks; there's nothing to do here." Actually, there's often two or three things happening every night — and in random places. I just went to the Cone [Editions] Studio in East Topsham. They're known internationally for developing a new kind of print technology. People travel from all over the world to go there.

SD: Having returned from Seattle, do you miss the big city?

MP: It's so much less physically stressful in the city; I loved the nightlife, and I loved my friends and the hiking. But getting involved here — even just in little things — just felt hopeful. Especially when things were going shitty in the rest of the world, I saw in Bradford that there could be humanity. I could see the humanity and the good things that could be.

SD: Well, that's a hell of a place to start. Where do you go from there?

MP: I'm starting to get involved in statewide boards, so I've been driving all around the state a lot for meetings. I like how unique all the downtowns are, [and] seeing the different restaurants and watching a town that you just went to a year ago have a completely different vibe a year later. Maybe it's just me, but I feel like everything's energized right now.

Each of [the statewide projects I'm involved with] is figuring out what's needed in different areas. These programs are all young people just coming together. It's super cool to walk into a room that's full of young people wanting to be involved.

MP: I feel like so many groups are yearning for new faces; they want to see change, and they want your energy. You just have to express an interest, and people will listen to it. And you have to go in genuinely wanting to help. So, saying you want to change this thing that's been in place for 50 years — you need to commit to doing the work. It's more than just opening your mouth with an idea. Do stuff. Get off your fucking couch. Just try things. The first step is to go to a community meeting. Once people finally do show up, they usually end up staying.